letters to a reader, unknown

Walk along the chalk flanks below Friston Forest, the valley of the Cuckmere unfolds in panorama, its serpentine navigation, abandoned oxbows and scattered flocks, a seemingly timeless image of a bucolic Sussex countryside. The wind drops and the roaring coastal traffic intrudes, a reminder of the present. Eric Ravilious’ watercolour of the Cuckmere’s sinuous curves was my early introduction to this very English artist. Cuckmere Haven (1939) captures the essence of the Sussex coastal downland, its meandering coils of water echoing those of the chalk land, of their common ancestry. It’s a landscape that can still retain a sense of distance and tranquillity, sometimes sombre, surprisingly isolated.

Although considered the artist of the South Downs, his work typifies the interwar years in output, reflecting his travels and homes beyond the Sussex connection. For Sussex to ‘own’ the artist is understandable given he lived and worked in Eastbourne, hence the connection with the Towner gallery, who hold a significant collection of his works, and a local preoccupation with his paintings of the Sussex landscape.

Ravilious is an artist who divides opinion; his work is cool and detached, his apparent failure to engage with the politics during the interwar years, an abiding criticism. Described variously as a very English artist, or dismissed as parochially inclined, Ravilious’ work reflects, above all, a preoccupation with the landscape and of human interaction with the earth. His work sits alongside other artists who, during the interwar years, engaged with a landscape on the periphery, a rural way of life untainted by metropolitan manners, yet sensed to be vanishing. Their work signalled an intensification, during the interwar years, of an exploration of the meaning of Englishness and the past in art and poetry.

Raymond Williams (1973/1985) critiques this nostalgia for a vanishing way of life, a lost golden age, ‘on the escalator’ always looking backwards at what’s gone before. He asks, In The Country and The City, if references to the ‘good old days’ is anything but a criticism of the present by reference to the virtues of a lost past:
[T]he successive Old Englands to which we are confidently referred but which then start to move and recede, have some actual significance, when they are looked at in their own terms […] we notice their location in the childhoods of their authors, and this must be relevant. Nostalgia […] is universal and persistent; only other men’s nostalgias offend. (Raymond Williams, 1973/1985:12)

The absence of figures in the landscape has been an enduring criticism of Ravilious’ landscapes. Yet, his depopulated fields are not romantic, they are worked, human activity evident and essential in the apparently abandoned machinery, necessary for human mark-making on the landscape. This rusting machinery offers silent commentary on past human endeavour, while fence posts are witness to the farm labourer stringing wire across the chalk downland. Well-used tracks reference the absent shepherd or the walker, who only recently passed across our view.

These reflections were prompted by a visit to the Towner, which has a significant collection of Eric Ravilious’ work and is a centre for its study and display. Later, an afternoon ramble across the coastal Downs, with the setting sun across the Cuckmere, reiterated the ‘deep space’ and tangibility of his watercolours. Discovering his work has offered me a route into early 20th Century English art that I had admired but little understood. 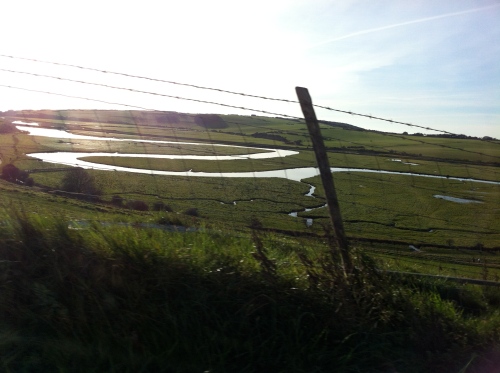